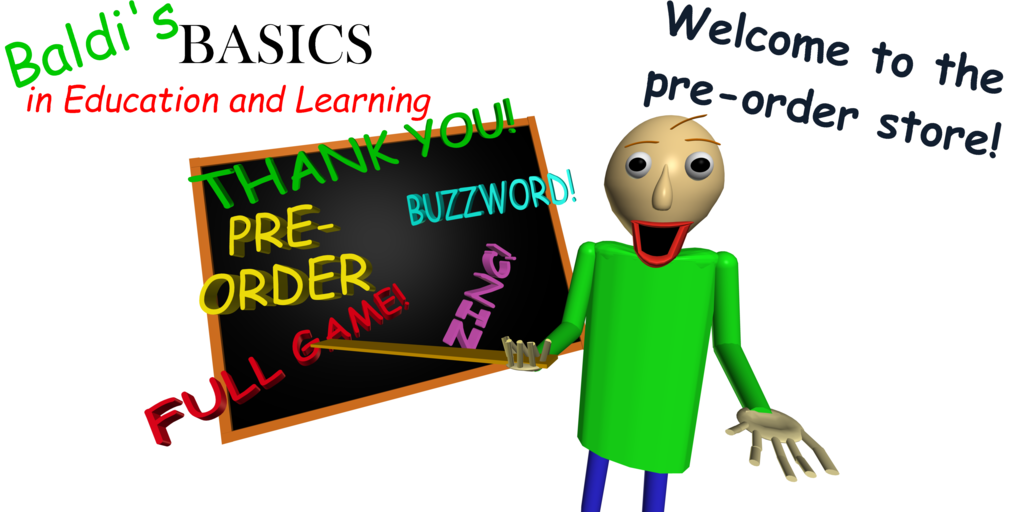 Hey everyone, just a small update to say thanks and mention what's currently going on.

First off, a few days ago the campaign got over a thousand backers, which is incredible, and I'm so thankful that so many people want a full Baldi's Basics game!

In regards to the current state of the campaign, I've noticed that a lot of people are concerned about how slow things have been lately. I just want to remind people that the most active periods for most Kickstarter campaigns are the beginning and end, and that if we managed to raise $25,000 in a week, we can raise just under $20,000 in the final week! I'm confident that this Kickstarter can succeed!

To help with promoting the Kickstarter, I will be releasing an update to the field trip demo in the next couple of days with some new content to check out and clearer info about the campaign. I've also got some video ideas planned (Maybe even a livestream!), and I'm going to try and contact some people who might be able to help spread the word. On top of all that, I've taken all of next week off of my job so I'll be around with plenty of time to work on this Kickstarter!

In regards to the Discord server, I'm still working on getting that ready to go (Obviously, more ready than the last time. :P). Once it's ready, I'll post a new invite link and open it back up again.

Also, some of you might not know that I recently released a bunch of my old Baldi comics on Twitter! I was asking people to retweet this tweet and for every 250 retweets, I released a new comic. Since it hit a thousand, I also released the Kickstarter video's soundtrack and some unused footage from the video, just as a fun bonus. Here's all that stuff in case anyone missed it!

Here are the videos:

So, as we enter these final few days, I'll do what I can to promote the campaign, and I hope you guys will help spread the word even more! Thanks again for the encouragement and support!

First off, we're officially one week in, and almost at 50%! This is really incredible, and I know we can hit the goal if the momentum keeps up! Thank you so much for all the support, pledges, and help spreading the word!

Now though, I want to talk about some other new features and details I plan on adding to the game! These aren't going to be huge or anything, but they will still be pretty significant gameplay wise. I also want to talk about how I go about creating new characters and how I want to make sure they all have good mechanics. Then, I've got some info on my newly launched Discord server!

First off, the You Can Think Pads will get a new feature, the ability to award You Thought Points (YTPs)! Depending on how quickly you solve the problems they present, you'll earn more YTPs. This way, solving the problems in the You Can Think Pads will be a bit more enjoyable and exciting than they are in the original. There will be other ways to earn YTPs as well, such as in field trips, or even through some characters! YTPs aren't just for show though, as they can be spent on items and special favors (Want to expel a character you don't like from the school for the rest of the current game? With enough YTPs, you could do that!) in a shop you'll stop at between floors!

"Wait, did you say floors?!?!" you might be asking for some reason. Well, yes! The school in the full game will be a towering building, and as you progress through the game's levels, you'll ride an elevator up towards the top of the school (Despite the fact levels will get bigger... Don't think about it too much. :P). So, instead of having to return to the exit to complete each level, you'll have to head back to an elevator instead. In later levels, some elevators might even end up being out of order and close on you as you approach... Sound familiar?

The process of creating characters

For this game, I want to make sure any characters I add are well designed from a game design perspective. I'm not just going to throw any idea that pops up in my head into the game; A character's mechanics need to be fun, unique from other character's, and balanced to make it in. Usually, when I think of a new character idea, I do so one of two ways.

One way is to think of a mechanic first. Before coming up with the actual character, I think up a gameplay mechanic to be used. For example, I have a note for a character who would only move when you're not looking at them. This is a pretty basic mechanic, yes, but I think it fits perfectly in Baldi's Basics. With that as a starting point, I can create the character's audio and visual design based around that mechanic (and a good amount of weirdness of course!) and hopefully end up with a great new character!

The other way I often come up with characters is when inspiration hits! For example, recently I was looking at my old Baldi comics, when I found a strip where Baldi goes to the doctor's office. The doctor hit Baldi's knee to test his reflexs, and then after a few panels, Baldi's knee finally reacted. After reading this, suddenly I got an idea! Dr. Reflex (Name definitely pending. :P)! If he sees you, he'll grab you, and then after a moment, a prompt for an input will show up on screen. You would have to press this input quickly enough to pass his test and continue. React too slowly or press the wrong button, and he will not be happy!

Of course, this approach could result in some wonky mechanics, but I'll make the necessary changes to make sure each character works well. If I end up with a character I just can't get to play well, they'll end up falling onto the cutting room floor, and be reduced to nothing more than an easter egg... :P

Edit: Well, due to my Discord inexperience, the server was a complete disaster! :P (I'm a programmer, not a Discorder... er.) I'll see if I can work things out, set it up better, get some mods, all that stuff. If I can get things worked out nicely, I'll try again. Apologies for the inconvenience!

Yes, due to demand, I've decided to launch a Discord server! You can join with this link:

If you want to discuss Baldi's Basics or this Kickstarter, you can do so there! I'm not sure how active I'll be on there, but I'll try to answer any questions people might have. One thing I will mention is that chat rooms aren't really my cup of tea, so I might not keep this Discord server active forever, but I'm willing to give it a shot and see how it goes!

That's all for now!

Well, that's all I have for this update! I know it's not a ton of info, but it's some stuff I wanted to get out there. I hope you all like it!

Thanks for reading, and if you've got any questions, please feel free to ask them!

We're at 25%! Thanks again for the incredible support, I wouldn't ever be here without you guys! Things are looking good, and I'm getting more and more excited to start working on this. Again, this is going to be a pretty small update, but I owe you guys so much thanks!

I do have a few small announcements regarding the Kickstarter though. Some people have been requesting these changes, so I made them! First off, anyone who backed the $99 tier who also wants one of the normal boxes, can now get one by pledging $10 above the normal amount (Including the additional shipping cost). The other change is that all $500 backers will now also get the limited edition box! There were some people who wanted the limited edition box, but also wanted to pledge $500, and I realized it wouldn't be right to deny those people the limited edition box as well. I can't update these tiers' descriptions to account for these changes, but rest assured what you see here and now in the Kickstarter's description is what you will get!

I'm still trying my best to answer all the questions coming my way, and I'm also planning on starting a Discord server once I get the chance. Unfortunately, today and tomorrow I have eight hour shifts at my job, so I'll be away quite a bit, but I'll try my best to answer questions on my breaks!

Anyways, thanks again, and please remember to keep spreading the word!

Hey, just a quick update to give out a huge thanks for the support so far! I think things are off to a good start, and if this pace continues, this will be funded in no time! I'm glad to see so many people excited for this project and supportive of it.

In the meantime, I hope you'll also help out by spreading the word. Sharing this Kickstarter on social media or with anyone you think might be interested is a great way to help. I'm sure there are people out there who would be interested, but haven't heard about this yet.

Oh, and also I'm trying my best to answer everyone's questions, so if you have any questions, please ask! You might also want to check out the FAQ to see if it's been answered there; I've been trying to fill that out as questions come my way.

So, thanks again! I know this is a small update, but I just wanted to get this out to you guys!